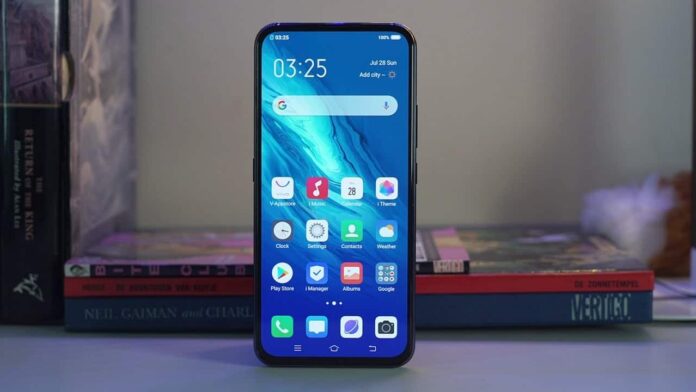 Vivo has been making all the news lately thanks to its competitively priced Z-series smartphones under rupees 20,000. Let’s not forget that the money maker for Vivo has always been the V-series of smartphones with its split-screen offline marketing it finds a lot of buyers. The latest in the V-series of the smartphones is the newly launched Vivo V17 pro.

This new Vivo V17 pro has six cameras inside its glass body. This smartphone design is all glass with a metal reinforced railing the outside of which feels like plastic though. The phone does look good from the front and the rear. It also feels very premium with its curved edges that nestle in your palms. The vertical strip has four cameras and a dual-LED flash module is placed bang in between the whole setup. The color of the strip is slightly different from the rest of the body. The V17 Pro comes with a popup module similar to its processor. But this time around the module is significantly bigger to fit two selfie cameras which open fairly fast.

It doesn’t include a full-fledged face unlock, it only works as a failsafe if your finger isn’t recognized three times by the scanner. Vivo continues to ship its V-series phone with a dedicated Google Assistant button on the left edge while the right has the power button and the volume button. It has a type C port at the bottom flanked on either side by the mono speaker and the dual SIM card trays. You don’t get additional storage expansion. There’s also the 3.5 mm jack on the top, a rarity in today’s smartphone design. Its display is a 6.44-inch FHT plus super AMOLED panel that is bright and colorful. It has a taller aspect ratio of 20:9 that makes it easier to hold and use as well.

The display has HDR support as well, also you get the latest short sensation UV glass protection on the front. The V17 pro marking feature is the six cameras. The primary camera on the rear is 48 MP. It is supported by three more cameras. An 8 MP super wide-angle camera, a 2 MP Bokeh camera, and a 13 MP zoom camera. On the front, you have a 32 MP selfie camera and an 8 MP ultra-wide camera. There is also a Super night mode, Beauty filters, Scene recognition, and more software features that you could ask for. The V17 Pro comes with a Qualcomm Snapdragon 675 chip, 8 GB of RAM, and 128 GB of storage. V17 pro runs on Android Pie and Funtouch OS on top of it. It comes with a 4100 mAh battery and supports 18 W dual engine fast charging tech. For the gamers, the phone could play at high settings and it ran fine without any problem.

The price of Vivo V17 pro comes under 30,000, which puts V17 pro squarely in competition with smartphones like the RedMI K20 pro and few others.

How to Choose the Best WordPress Hosting Provider

How to Choose the Best WordPress Hosting Provider